The increasing threat of scams aimed at new students

The first few days and weeks at university can be wonderfully exciting, but of 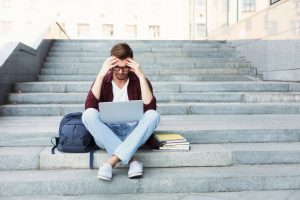 course it’s also a time for having to take in a great deal of information. Brand new students have to find their bearings rather quickly, while at the same time they meet new people, discover new surroundings and adjust to a completely different way of life.

In recent years, we have seen a huge rise in the number of financial scams that come our way via emails, letters and phone calls. For most of us, spotting a fake communication can be rather simple, but the more adept the scammers get the more likely they are to be believed.

And for the student population, knowing the difference between real and unreal isn’t always easy. The majority of new students are only just starting to deal with any form of financial independence, so it’s perhaps understandable that the criminal element will target this group more and more often.

There’s a very definite knowledge gap for those staring out on their first tentative steps towards further education, and this is a gap that needs to be bridged. It’s easy to imagine how tempting it would be for a new student to click on a link that supposedly comes from HMRC and promises a much-needed tax rebate.

Many people tend to think of cybercrime as an attack on the business community, but there are thousands of fraudulent attempts made on individuals every day. Recently, HMRC has issued advice to the student community to be on their guard when receiving communications that purport to make them richer.

One of the main problems is that the general public don’t always understand how the tax system works, so when an apparently genuine email arrives from HMRC, the university itself or an agency dedicated to claiming back money on your behalf, some individuals are highly likely to want to find out more. And after all, what harm could a single mouse click do?

As well as advising students directly, HMRC has also asked universities to make sure their student body as a whole is aware of potential scams. It’s hoped that higher learning institutions will start to include such advice in their induction materials that are given to newcomers.

A recent survey by YouGov has highlighted the lack of understanding many of us have in regard to the tax system, and the younger age groups scored particularly low marks. Given their inexperience this is perhaps understanding, but there’s no denying the fact that it’s a worrying time for new students and, undoubtedly, their parents.

To find out more about the threat of tax-related cybercrime, have a chat with the team at FourM soon. We look forward to hearing from you on 01382 480 488 soon.