New fathers not making the most of shared parental leave 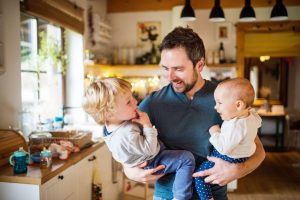 family finances, especially in the aftermath of a new arrival. For many years, mothers were entitled to maternity leave but fathers couldn’t claim anywhere near as much paternity leave, if any at all. There was an imbalance, and in recent times legislation has been introduced to make the situation easier for both mums and dads.

In many homes now, both parents will be working. The laws have changed to enable new fathers to have more time off when a new baby comes along, and for couples to share their leave in order to give both the chance to adjust, and of course to enjoy the new arrival. It seems like an excellent idea, but recently released figures suggest not many fathers are reaping as many of the benefits as they’d perhaps like.

After many years of campaigning, the UK introduced new shared parental leave (SPL) rules in 2015. In essence, they allow new parents to share up to 50 weeks of time off after the birth of a child, and this is to include 37 weeks of statutory pay. In the long run, it’s to be hoped that more and more fathers will be able to enjoy more family time at a crucial stage of the child’s development.

Now, after four years of the legislation being in place, figures reveal the worrying trend that relatively few new fathers are making the most of this opportunity. Even the fact that the leave can be conveniently used up in blocks as well as all at the same time has failed to capture the imagination as yet, with only around 1% of new fathers claiming the time off that they have a right to take.

And perhaps most worrying of all, some new dads have reported various forms of discrimination in the workplace as a result. Many fathers have reported misgivings about the amount of maternity pay their partners receive in comparison to the paternity pay they have been offered. More mums, it seems, are receiving enhanced pay, which is offered on a discretionary basis by employers.

If new fathers are offered only basic statutory pay – which at the moment stands at £145.18 per week – then it’s easy to see why so few are claiming all the paternity leave that they’re entitled to. It’s also worth noting that statutory pay isn’t available to the self-employed or those working on zero hour contracts. It’s to be hoped that over the long term SPL proves to be a winner, but so far the results are disappointing.